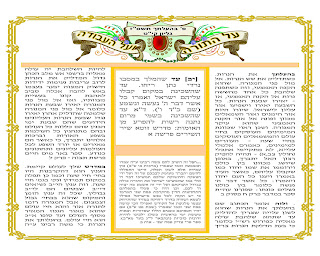 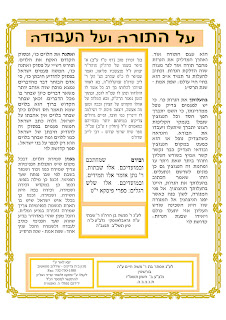 Posted by Avromi at 7:44 PM No comments:

“And Hashem spoke to Moshe saying: Speak to Aaron and say to him: When you kindle the lamps (of the Menorah), towards the face of the Menorah shall their light be directed” (Bamidbar Ch.8 v.1-2). Rashi explains that when Aaron saw the sacrificial offerings the head of the tribe offered at the dedication of the Mishkan, he felt bad that the tribe of Levi (of which he was part) was not included. The reason the Levites and the Kohanim (priests who were Levites descended from Aaron) were not included in the number of tribes, and were not given an inheritance in the Land of Israel is as follows: During the incident of the golden calf the Levites were the only tribe that was not at all involved. This was typical of the Levites, as even during the bitter years of enslavement in Egypt they had never been enslaved, as they were too busy studying Torah and Pharoh left them alone.

The Ohr Gedalyahu explains: Each head of a tribe offered up the exact same sacrifice (see Bamidbar Ch.7). Moshe did not want to accept their sacrificial offerings, however, as he did not understand their intentions behind the offerings, until Hashem told him to accept it. This was one of the first manifestations of the Torah She’bal Peh. The body of each sacrifice was identical. The reason and intent each one put behind the offering was different.

This is how we relate to the Torah She’bal Peh. The body of law is the same for every Jew (with minor variation in detail). But the intent behind it can be different for each Jew. The Vilna Gaon says that when the Jews accepted the Torah each person related to it in 70 different ways.

This concept answers the age-old dilemma. How can a Jew retain his individuality while at the same time keeping the Torah the same as millions of other people.
When Aaron saw he did not have an offering he worried that perhaps the Levites would not be able to express their individuality through the Torah She’bal Peh. Then Moshe appeased him by saying, “You will have the honor of the daily lighting of the Menorah.”